A Beginner's Guide to Vionic 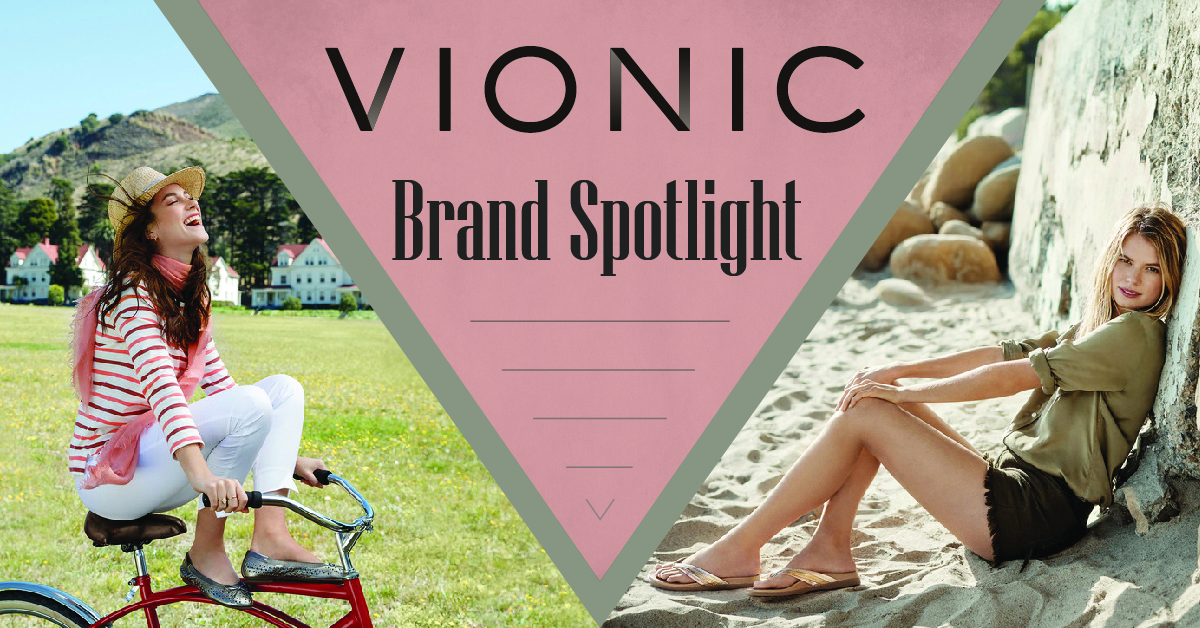 Finding a solution to foot pain can be tricky. For many people, it means trips to the doctor and expensive custom orthotics. The time and cost can deter some people from seeking treatment for their foot pain. While of course nothing can replace a personalized treatment plan from a podiatrist, Phillip J. Vasyli saw an opportunity to help those who might be unable or unwilling to visit one. His dedication to helping others become pain-free affordably led him to found Vionic, a footwear company that makes orthotic treatment accessible.

Phillip Vasyli is a podiatrist on a mission. He realized early in his career that treatment for common foot ailments like plantar fasciitis were both time-consuming and costly, deterring many patients from seeking treatment. For a man described by those closest to him as a “born healer,” this was unacceptable. He needed a solution that could make orthotic treatment an option for more people. His search led him to create one of the first ever heat-moldable orthotics, a process that lowered the barriers for those seeking treatment for foot pain. In fact, it allowed people to walk out of his office with their orthotic the same day as their appointment!

His work with heat-molded orthotics eventually led to the creation of the Orthaheel orthotic. Orthaheel is the first and only orthotic made available without a doctor’s prescription. This award-winning technology brings support and stability to shoes, boots, sandals, and more! If Orthaheel sounds familiar to you, it might be because the name of the technology. Since many people associated the idea of orthotics and anything that sounds vaguely like “orthotic” with unattractive, bulky shoes, Vionic rebranded. They took on a new name that better reflected their identity as a maker of stylish shoes that also happen to have orthotic comfort! The name may have changed, but the comfort technology has not.

We’ve already talked a little about how Vionic technology came to be, so we’re going to dive right in to how it works. All of Vionic’s stylish flats, sandals, sneakers, and slippers have Orthaheel technology built in. Our feet evolved to walk on soft, natural surfaces that give against pressure, but we spend most of our time walking on unforgiving man-made surfaces. Orthaheel mimics the natural print your foot leaves on those soft surfaces. The heel cup is deep, cradling the heel to stabilize it. The arch support is pronounced, meant to hug the curves of your feet. The midsole is flexible so it moves when and how you do. Designed with natural biomechanics in mind, Orthaheel technology provides support and alignment from the ground up!

When an occasion calls for a shoe with a little bit of height, Vionic still has the technology to keep you comfortable. Their wedges and heels feature Elevated Support, a comfort technology adapted from Orthaheel. The same contoured arch support found in their flat shoes can be found in the wedges and heels, as can the deep heel cup. Because heels place pressure on the balls of your feet, Elevated Support technology features extra cushioning underneath them for added comfort.

Podiatrists approve of Vionic’s footwear. Many of their shoes bear the American Podiatric Medical Association (APMA) Seal of Acceptance, meaning Vionic is one of few brands whose products actively promote foot health. Even their sandals have been shown to reduce foot pain, an almost unheard of accomplishment as sandals are generally the least supportive footwear. In a peer-reviewed study partially funded by Vionic, participants over the age of 50 with moderate, non-traumatic heel pain reported that Vionic sandals effectively helped to alleviate their pain. While flat flip flops may exacerbate symptoms, Vionic’s contoured sandals can alleviate them, making sandals an accessible summer option for pain sufferers. If you’ve struggled to find footwear that offered the orthotic support you need and the style that you want, Vionic’s innovative technologies can help.

Now that you’re sold on Vionic’s inventive comfort solutions, we’re sure you’re ready to see their trendy styles! Here’s just a few of our faves.

Flip flops are a summer staple for a reason. When you wear them, your feet aren’t cooped up and sweating, and they’re easy to throw on and go. If you had to give up flip flops because they’re usually flat and unsupportive, you’ll love the women’s Tide II with Orthaheel technology. The EVA midsole is lightweight and shock-absorbing, while the TPR outsole features a patterned tread for traction. Cushioned straps and a soft woven toe post mean that the comfort of this sandal carries right through the upper. Plus. the woven/leather straps come in a variety of colors and patterns meaning there’s a Tide II style for every woman’s wardrobe. 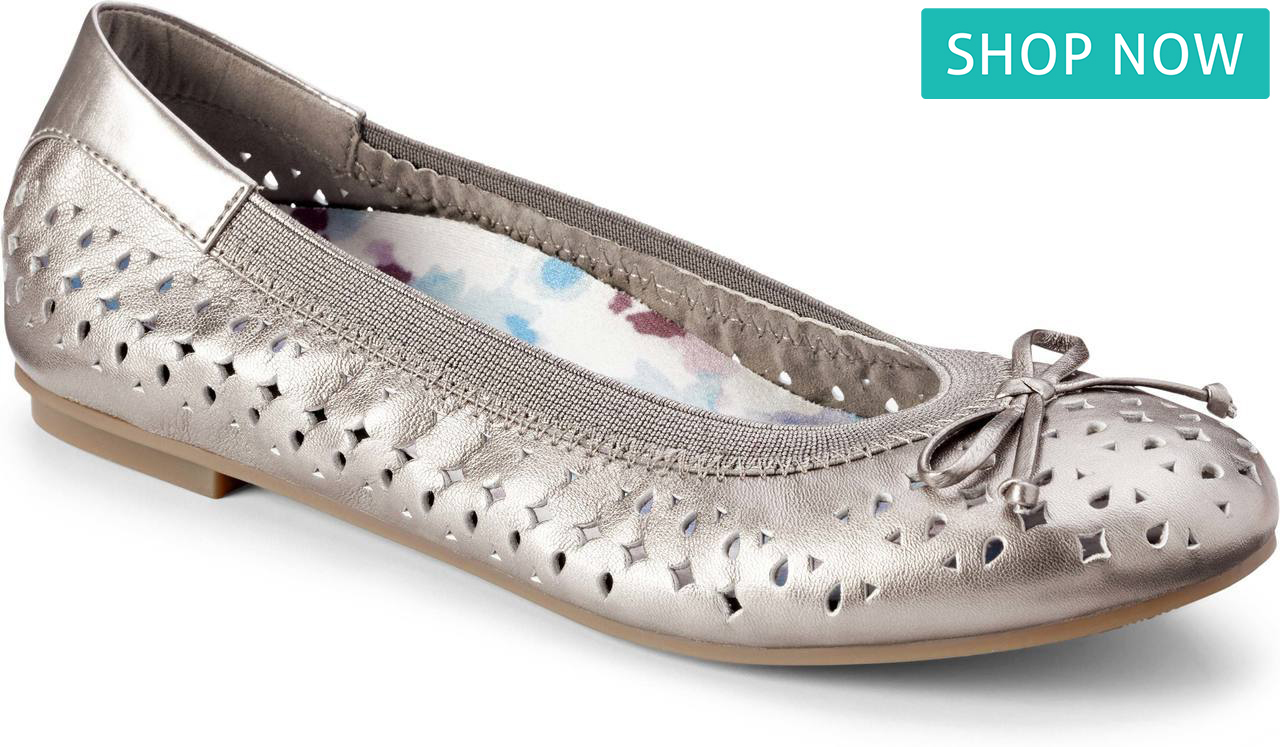 The Vionic Women's Surin in Pewter. Also available in Nude and Black.

With Vionic’s Surin flat, getting dressed up for an event doesn’t have to be painful. Well, choosing the perfect outfit might still be a little painful, but we can at least promise that your shoes won’t be! The Surin features Orthaheel, of course, so you can be sure that your feet will be comfortable and supported no matter what you’re getting dressed up for. It has stylish leather uppers available in a flashy metallic or understated neutral colors with cutout details that add both a touch of detail and a little bit of airflow. The TPR outsole means that this flat also has traction to spare. 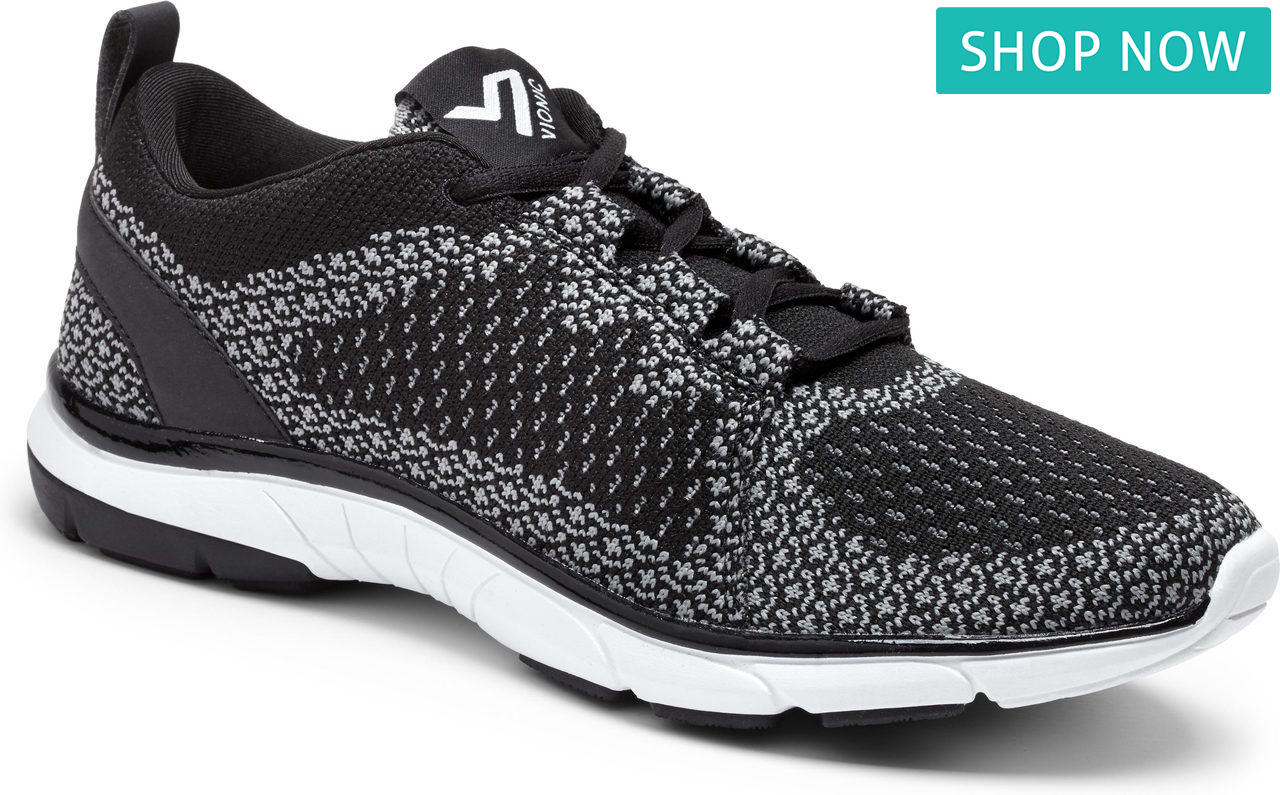 Staying active is important, but it can be hard to do when you’re dealing with foot pain. Luckily, Vionic offers their incredible support and comfort in active styles in addition to fashion styles! The Sierra Active features Advanced Motion System technology that combines their podiatrist-approved insoles with flexible outsoles and breathable uppers. This sneaker features a man-made knit upper and durable rubber outsole so your feet stay cool and firmly on the ground while you’re exercising.

If you suffer from foot pain, give Vionic a try. This brand created by a podiatrist caters to individuals who need shoes with a little orthotic support who aren’t willing to sacrifice style to get it. Whether you need dress shoes, active shoes, or casual shoes, flats or heels, Vionic has a comfortable and fashionable look for you! Find your perfect pair of Vionic shoes in one of our stores or right here on our website.