What is the Difference Between Snow Boots and Winter Boots? 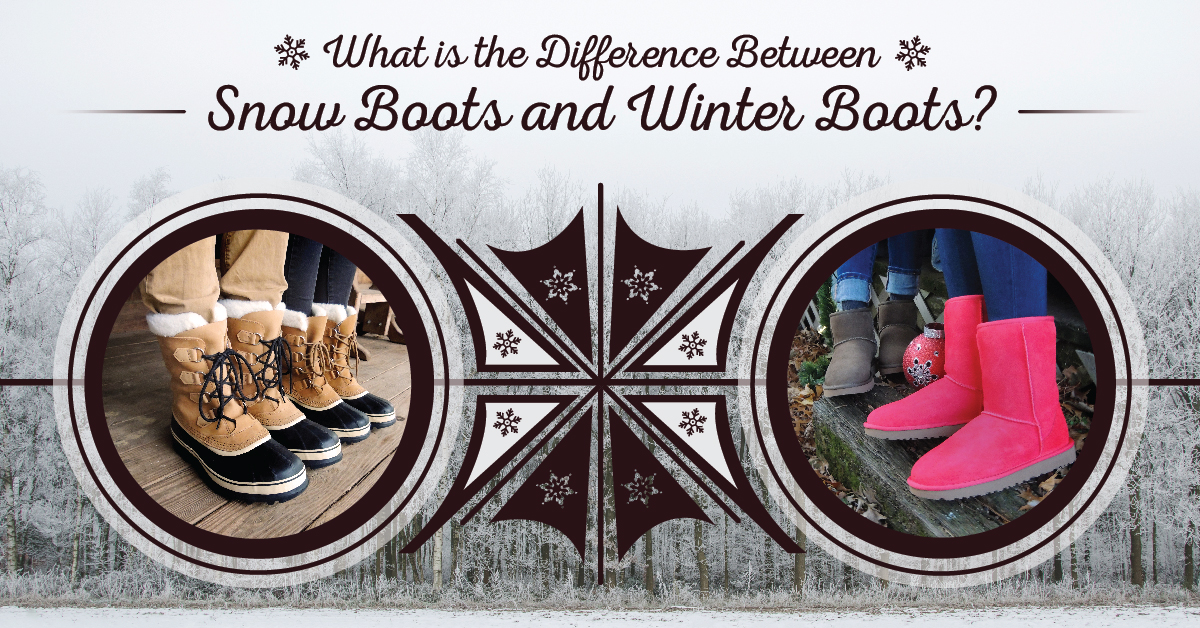 Alright, people. It’s cold out there. Winter might not actually begin until the 21st, but you would be forgiven for thinking it was already here. If you’re not already geared up for winter, now is the time to winterize your wardrobe, especially your footwear! There's one question in particular that we've noticed popping up relatively frequently regarding footwear for frosty weather: what's the difference between winter boots and snow boots?

It's a fair question. For many people winter is inseparable from snow and snow is inseparable from winter, and this leads to the assumption that the two types of boots are interchangeable. Using them interchangeably is a sure road to disappointment, though, because they're not actually interchangeable. Snow boots and winter boots have different functions, different strengths, and different purposes. It's important to understand which best fits your needs, so today we're going to do some comparing and contrasting so you can decide whether you need to invest in a winter boot or a snow boot.

Snow boots are obviously great for snowy days, but more than that they're great for very cold, very wet days in general. Snow boots are seam-sealed and feature a shell around the foot that's made of rubber or another similarly impermeable material. Their soles are generally thick and heavy with deep treads to add increased traction in icy and snowy conditions. Most have a tall shaft that ends several inches above the ankle and feature some kind of lacing system used to pull the boots tight against the calf to keep out snow. Additionally, snow boots are insulated against frigid temperatures. Different boots feature different types and amounts of insulation, and the most heavy-duty can have temperature ratings for use many degrees below zero. Between the insulation and the soles, these boots can get pretty heavy.

For places where the average snowfall for a year is measured in feet and people who spend lots of time outside during the frigid winter months, a good pair of snow boots is a necessary investment. If you've got a ski vacation on your calendar, you'll want to invest in a pair of snow boots. Snow boots will even come in handy at home: if you want to build a snowman, have a snowball fight, or shovel your driveway while keeping your feet warm and dry, get yourself some snow boots.

The Sorel Caribou is a great snow boot example. It's got a tall, waterproof leather shaft with laces going nearly to the top of the boot and a vulcanized rubber shell around the foot. The AeroTrac sole is built for traction in treacherous conditions. The Caribou is rated to -40°F/-40°C, and with the intense insulation and heavy-duty sole these boots have some serious heft to them when you pick them up. For miserably cold, wet winter days, the Caribou is the perfect companion.

Winter boots are like the acoustic version of snow boots: stripped down to the bare essentials. Winter boots can be waterproof, but they aren't always. If they're not waterproof then they've probably been treated for water-resistance, but water-resistant and waterproof mean two very different things. A water-resistant boot is going to be fine if a few snowflakes or a couple small drops of water fall on it, but will be damaged by prolonged exposure to extremely damp conditions. Winter boots are usually warm, but they're generally not temperature rated or meant to keep the chill out over extended periods of time. Winter boots will generally weigh less than snow boots.

For places where winter is generally mild or for people who are only outside in short bursts, winter boots are a great option. Don't wear them in a blizzard or to go stomping through the slush, but for running errands on cold and dry days a good pair of winter will serve you well.

The UGG Women's Classic Short II in Ribbon Red. Also available in Black, Spruce, Chestnut, and a variety of other colors.

The UGG Women's Classic Short II is a classic example of a winter boot. These suede boots are pre-treated to help prevent moisture damage, but they're not meant for wearing out in a snowstorm. Their twinface sheepskin keeps your feet warm, and the Treadlite sole provides the shoe with some traction. These boots are durable when worn properly, and wearing them properly means keeping them dry. These are the winter boots you'll turn to on those clear and bright but freezing winter days.

We're sure you're wondering which one you need, and our best recommendation is one of each. A snow boot is going to keep you drier and warmer than a winter boot could, but a winter boot is probably going to be more fashionable. You'll wear your snow boots when you're outside clearing snow off the driveway , and you can keep them in your car to slip on when you have to tromp through a snowy parking lot to get to work or get caught out running errands in a snowstorm. Since you don't want to drive in snow boots (like we said, they're pretty heavy, and the thick soles make them a bit inflexible) and you don't want to have to clomp around in them indoors, having a pair of winter boots to slip on when you're in your car or inside is helpful. The winter boots still offer some protection to your feet but are easier to wear inside.

Now, if buying one of each boot isn't something you're interested in, we understand. There are plenty of in between options for you to consider. The Sorel Emelie, a cute and stylish Chelsea boot, is also fully waterproof. Duck boots like the Sperry Saltwater or UGG Women's Cecile are good options that are waterproof and lightly lined for a bit of warmth but still lightweight and flexible enough to wear all day. They won't keep snow out if you're walking through a foot of it, but they'll offer protection while you're out running errands on plowed sidewalks in a snow flurry. If you're more worried about sheets of ice than banks of snow, the Merrell Women's Jungle Moc Ice+ or the Merrell Men's Jungle Moc Ice+ featuring Vibram® Arctic Grip™ will help you stay on your feet all season long. In places with milder winters that experience more wet slush, something like a Bogs Classic High Handles boot might be more useful than a hyper-insulated snow boot. Even that classic winter boot staple, the UGG Classic, has gotten a functional upgrade in the new UGG Classic Waterproof design, a fully seam-sealed take on the original design with Arctic Grip™ soles.

We hope this has helped clear up some confusion about the differences between snow boots and winter boots. With such a wide range of winter-ready footwear available to you, choosing the best pair really comes down to your own lifestyle and needs. Take stock of how you plan to use your winter footwear, then find the perfect pair with all the features you need over on our website!